The resolution was sponsored by Rep. Albert Wynn [D-MD] and cosponsored by a large bipartisan group to achieve two goals:

“Once my loved ones accepted the diagnosis, healing began for the entire family, but it took too long. It took years. Can’t we, as a nation, begin to speed up that process? We need a national campaign to destigmatize mental illness, especially one targeted toward African Americans…It’s not shameful to have a mental illness. Get treatment. Recovery is possible.”
-Bebe Moore Campbell, 2005

Despite advances in health equity, disparities in mental health care persist. The National Minority Mental Health Awareness Month held in July of each year aims to change this dynamic to better address the struggles that underrepresented groups face in regard to mental illness in the United States.

According to the Substance Abuse and Mental Health Services Administration (SAMHSA): 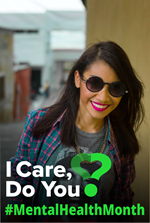 NAMI Atlanta/Auburn in Atlanta, along with NAMI and other NAMI affiliates throughout the U.S., works to educate our communities about the importance of improving access to mental health care and treatment and to help break down other barriers such as negative perceptions about mental illness.

Taking on the challenges of mental health conditions, health coverage and the stigma of mental illness requires all of us. In many communities, these problems are increased by less access to care, cultural stigma and lower quality care.

Help us spread the word through the many awareness, support and advocacy activities. Share minority mental health awareness information, #MinorityMentalHealth throughout July and all year long.

Strength Over Silence: Stories Of Courage, Culture And Community

Let's get in touch

Send us an email and we'll get back to you, as soon as possible.

Your donations ensure no one fights alone! Donate Today